Since our last week three weeks ago, crude tanker rates have softened with VLCC and Aframax average spot rates at approximately $12,000 pd and Suezmax tankers at approximately $16,000 pd, on the back of weak trading activity. At such levels, crude tanker spot rates stand substantially below the yearly average, and it has to be noted that present VLCC rates are very close to operating break even and far below levels required to pay for the vessel’s financial cost as well. Despite the weakness in freight rates, there has been meaningful activity in the sale & purchase market at strengthening prices, as optimism keeps building that the crude tanker market is well into a structural market recovery, and thus the present weakness in the market is only seasonal. A recent article on Reuters that pressures are building up in the US on allowing crude oil exports can only interpreted as a positive development for the crude tanker markets. 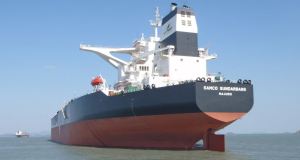 Double Hull Tankers DHT Holdings (NYSE: DHT) has finalized the acquisition of Samco Shipholding Pte Ltd in Singapore with ownership of seven VLLC tankers with average age of 4.5 years at approximately $322 million; DHT Holdings also acquired in the same transaction and remuneration Samho’s 50% interest in Goodwood Ship Management.   The vessels are built at Hyundai Samho and they are MT „Samco Sundarbans” and MT „Samco Taiga” (2012, Hyundai Samho, 318,000 dwt), MT „Samco Amazon” and MT „Samco Redwood” (2011, Hyundai Samho, 318,000 dwt), MT „Samco Europe” and MT „Samco China” (2007, Hyundai Samho, 318,000 dwt) and MT „Samco Scandinavia” (2006, Hyundai Samho, 318,000 dwt). This being a corporate transaction rather than a pure asset acquisition, there have been additional considerations, although DHT Holdings appears to be paying approximately $50 mil below the nominal market value of the vessels. On pure asset sales, BW Maritime of Singapore has sold MT „BW Nyssa” (2000, Daewoo, 299,500 dwt) to Smart Tankers in Greece at $29.5 million, probably at a $2 million premium over the market. The price reveals strong buyer’s optimism as the vessel is due drydock and special survey in January 2015 at a cost of several million dollars while she will be turning the dreaded 15th anniversary from delivery that puts her on the second priority list of many charterers. The vessel was reported in January 2014 as tied up to a conversion project at $32 million purchase price which transaction apparently has not materialized.

As we have mentioned in the past, despite the increased buying interest in the crude tanker market, buyers keep being very price sensitive with strong preference for Japanese or Korean built tonnage, and usually for vessels built in a year starting with ‘2’ getting more of the attention. Given that most banks would not provide mortgage financing for older than ten-year-old tankers, independent tanker buyers paying cash have been very opportunistic on their approach, and any urgency in the sale or other transaction handling mishaps or limitations from the sellers usually end up costing a lower sale price. 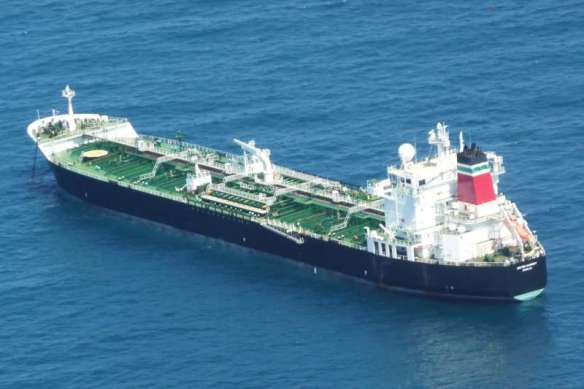 The MR2 tanker MT „St. Nikolai” (2005, Onomichi, 47,000 dwt) achieved $17.5 million by Indonesian buyers (technical details on the vessel are conflicting, but it seems she’s ‘pumproom design’ which would make her price in line with the market). The older but seemingly more sophisticated tanker MT „High Nefeli” (2003, STX, 47,000 dwt) achieved $15 mil by Greek buyers (Benetech Shipping). MT „British Harmony” and MT „British Chivalry” (2005, Hyundai Mipo, 47,000 dwt) were sold by BP at $19 each with bareboat back to the sellers for two years at undisclosed rate ($8,000 pd bareboat rate some wishfully well-placed reports mentioned) on an operating lease basis. MT „Topaz Express” and MT „Diamond Express” (2009, Minami Nippon, 45,700 dwt) were sold at $22 million each by Daichi Chuo to Island Navigation in Hong Kong. The older MR2 tanker MT „Hellas Progress” (1999, Hyundai Heavy, 46,000 dwt) has been reported sold by Latsco (London) Ltd. to West African interest at $10 million. For modern tonnage, publicly traded companies have also been active with acquisitions in the sector with Scorpio Tankers (Nasdaq: STNG) acquiring from Ceres Hellenic SPP Hull No S5126 on resale basis (2014, SPP, 50,000 dwt) at $37.10 million. Aspiring to soon to file for a public listing, Singapore based Navig8 acquired at $41 million each six MR2 tankers from Wilmar MT „Polaris” (2014, Hyundai Vinashin, 49,000 dwt) and sistership Hull Nos S401, S402, S403, S404 and S405 (2014/2015 delivery, Hyundai Vinashin, 49,000 dwt); the Scorpio acquisition seems to be in-line with prevailing market levels while the Navig8 acquisition seems to be a 10% premium to the market, which is especially interesting given that the shipbuilder is not considered top tier name. 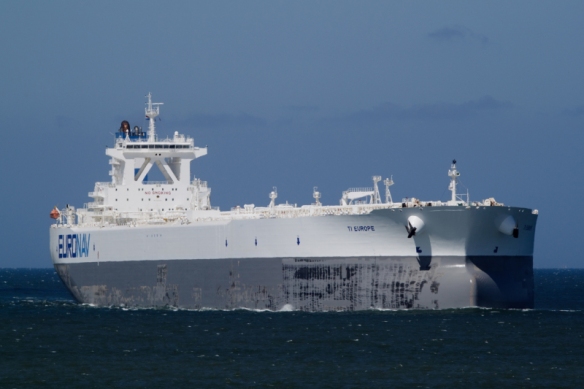 Crude oil has been trading in contango recently and a number of crude oil tankers have been reported chartered for storage, including Euronav’s 442,000 dwt ULCC MT „TI Europe” taken by China’s Unipec for six months plus options at $25,600 pd. The level of discount for present delivery of the commodity is still weak to justify a massive storage play and absorption of crude oil tanker supply from the market which hopefully would boost freight rates. The recent strength of the US Dollar reflecting the Fed’s statements about increasing interest rates in the US has had a negative impact of commodities, in part causing the contango, but making commodities less attractive as a storage medium, especially in an increasing interest rate (costlier) environment thus putting a limit to the storage play. On the other hand, increased refining capacity by Middle East refineries seems finally to be having a positive impact on larger product tankers (LR1 and LR2), a story hyped to ethereal existence for several years now. There are hopes that finally there will be impact on the market which could improve asset pricing. The waiving of export taxation on certain palm oil gradients by Southeast Asian countries, most notably Indonesia, in an effort to win market share on the world markets in a bumper crop season for palm oil, hopefully will have a positive effect on IMO III / veg oil chemical tankers.

Honestly, shipping can use all the help it can get in improving freight rates by contango and storage, to increasing refining capacity in Middle East, or fiscal strategy to move around record levels of vegetable oils.

HARBORS WE HAVE BEEN